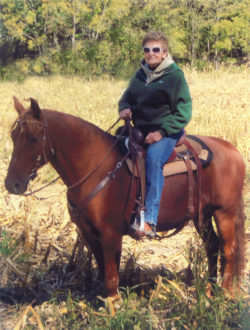 Beverly M. Hinsenbrock, 83, of Clermont, Iowa died Wednesday, April 17, 2019 at her home surrounded by family.    She was born June 6, 1935 at home in Greeley Iowa.  Beverly grew up in Greeley and Guttenberg.  Her love of horses began early when she lived in Greeley and would go down the road and beg rides on the draft horses from the Hoberts, who had a large draft horse operation. Beverly passed on her love of horses to her children, grandchildren, and great-grandchildren, all of whom are active in rodeoing and riding horses.  Beverly was also active in sports and played basketball at Guttenberg High School.  She was the start of four generations of her daughter, granddaughters, and great-granddaughter playing girls’ basketball.

Beverly’s love of dogs was well-known and she had many loving and faithful dogs in her lifetime.  When someone was experiencing difficulties, her answer was always, “They need to get a dog”.  If they already had a dog she would add, “Well, they need to get another dog.”  After all Beverly’s philosophy was that dogs were like potato chips – You could never have just one.

Beverly was united in marriage with Richard Hinsenbrock in 1955.  Two daughters were born to this union, Vicky and Kim. When they were first married, they lived in Guttenberg and then moved to a small farm outside West Union. In March of 1967, they purchased their farm at Clermont and lived there the rest of their lives.   At one time they raised sheep, beef cattle, pigs and milked cows plus had a few horses.  Although Beverly was not raised on a farm, she was a very hard worker and partnered with her husband as they farmed successfully through the years.

Beverly enjoyed riding horses all her life.  After the girls graduated, Beverly began showing again.  She had a very successful show career with her horse DeeDee, showing in halter and pleasure at NEISCA shows.  Beverly also raised and showed futurity colts and won numerous awards at the Tri-State Futurity.  In later years, she rode trail rides.  She was a longtime member of the Volga River Riders and was very active in the saddle club.  For probably the last twenty years, Beverly would say she had to ride as much as possible because she couldn’t guarantee she could ride again the next year.  This is that next year, her last ride was in 2018.

Beverly was preceded in death by her parents & step-parents, Moxie and Louise Rademacker and Lowell and Gertrude Smock, her husband, Richard Hinsenbrock (4/16/2009) and two brothers, Duane “Bud” Smock and Don Smock.

Beverly’s family would like to thank Lance Hangartner and Joyce Schott for their kindness and support.

A Celebration of Life will be held from 4-7 pm on Wednesday, April 24, 2019 at Schutte-Grau Funeral Home and Cremation Service of Clermont, Iowa.

In lieu of flowers memorials may be made to Palmer Lutheran Hospice and Gilbertson Conservation Recreation Area.

Schutte-Grau Funeral Home and Cremation Service of Clermont, Iowa is helping the family with arrangements.