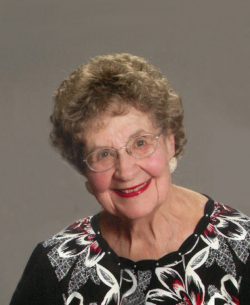 Dorene Dorothy Larson, 81, of McGregor, Iowa died Wednesday, November 20, 2019 at MercyOne Hospital in Dubuque, Iowa. Dorene was born April 5, 1938 to Frederick and Florence (Meier) Becker on the family farm in McGregor, Iowa.  She attended Giard Country School and graduated from Monona High School. Dorene worked for REC in Postville, Iowa before she was united in marriage with Harry Larson on November 22, 1963 at Giard United Methodist Church in Giard, Iowa. They moved to California while Harry served in the Navy. While in California, their first son was born. In 1965, they moved back to Iowa where Harry and Dorene had 3 additional children. Dorene enjoyed being a farm wife and homemaker, enjoyed cooking, baking and helping in the fields. She sold Tupperware and worked as a cook for the Mar-Mac Schools.

Dorene was known for being a loving, devoted wife and mother. She loved playing the church organ, which she did for over sixty years. She taught Sunday School and was devoted to the church, serving in many groups including UMW. Dorene was treasurer of the Giard Cemetery Association. Faith was an important part of her life. She served in 4-H for 45 years. She was inducted into the Iowa 4-H Hall of Fame. Dorene enjoyed dancing with Harry, sewing, quilting, music and socializing with others. She always had a smile on her face. Her grandchildren and great-grandchild brought her great joy throughout the last 25 years.

Visitation will be held from 3 to 7 pm on Monday, November 25, 2019 at Leonard-Grau Funeral Home and Cremation Service, Monona, Iowa. There will also be a one hour visitation before services at the church on Tuesday.

Funeral Service will be at 10:30 am on Tuesday, November 26, 2019 at Living Faith United Methodist Parish, Giard, Iowa.

There will be a luncheon at Living Faith United Methodist Parish in Monona, Iowa after the burial.

Leonard-Grau Funeral Home and Cremation Service of Monona, Iowa is helping the family with arrangements.