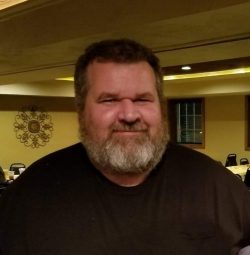 Andrew was united in marriage with Anessa Scholbrock on April 26, 1997 at Immaculate Conception Catholic Church in Sumner, Iowa. Three children were born to this union.  Throughout the years, Andrew worked at various places, most recently being New Hampton Repair LLC and Atek Metal Technologies. He was a member of Holy Name Catholic Church and St. Francis (Xavier) Catholic Church. He enjoyed spending time with his children, family and friends, welding, building things, woodworking, motorcycling and camping. Andrew had a great sense of humor and was a great “supervisor”. He also had a love for his dogs.

Andrew was preceded in death by his father, Leo; two brothers, Russell in infancy and Christopher; and his grandparents.

Visitation will be held from 4-7 pm on Wednesday, February 26, 2020 at Burnham-Wood-Grau Funeral Home and Cremation Service in West Union, Iowa. There will also be a one hour visitation before mass at the church on Thursday.

Mass of Christian Burial will be at 10:30 am on Thursday, February 27, 2020 at Holy Name Catholic Church in West Union, Iowa with Rev. Donald Kombah as the Celebrant.

Burial will follow at Hawkeye Cemetery in Hawkeye, Iowa.

Burnham-Wood-Grau Funeral Home of West Union, Iowa is helping the family with arrangements.